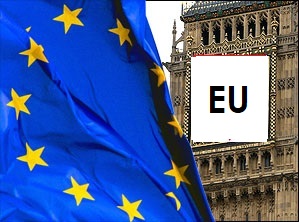 
Ms. Emma Thompson, noted
actress shares her moments together with her
"adopted son" from the African country of Rwanda
from where he fled to Britain as a refugee and joined
her and her husband in a family union, suggesting
a possible course for others to similarly take perhaps.


Nigel Farage - Leader British MEP speech excerpts - just 14 seconds
long Fair use claimed absolutely for this hereby proclaimed "fair use"
clip lasting a mere 15 seconds of a speech in Parliament in Brussels.
In the first part of the clip, Nigel suggests an EU president making more
than "President Obama" is disconcerting as a concept perhaps too, he
goes on to admit he doesn't want Europe to have global power but
desires instead to see the British back in those areas instead (doing
the same and getting the same results as previously we ask?)


British Leaders are openly "in disdain" of Europe says
this Member of Parliament at the EU of what seems to
be the mood they seem to be reflecting of their broader
constituents on the planet it seems to be, I fear to add.
(fair use claimed pursuant to relevant statute and common law
traditions as applicable in any event)